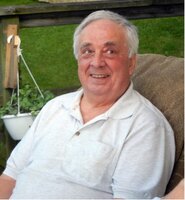 Born October 16, 1931 in Blackburn, Lancashire, England. Died August 6, 2021 in Alexandria Ontario. George emigrated to Canada in 1957 and, in due course, became a Canadian citizen. With experience in textile research, he worked within that industry in Kingston, Montreal and in Hawkesbury where he managed two plants.

In 1975 he married his second wife, Fran Deragon. They lived in Hudson and became owners of Centre Décor Hudson until 1993. Upon his retirement they moved to Vancouver Island where they enjoyed warmer but wetter winters for six years before returning to the Vankleek Hill area.

George was blessed with a great sense of humour and a love of music, classical and jazz. He played trombone with a mellow tone in many jazz bands. Mechanically-minded, he once built an MG-B with his brother.

George is mourned by his loving wife, Fran, his son Sean (Lin-Lin), daughters Karen and Nicole (Cruz) and step-sons, Jon (Lisa) and Andrew (Jordan) as well as grandchildren, Alberta, Finn, Amaya, Owain and Justin. He is survived by his brother, Frank (Margaret).

As per George's wishes a Private Celebration of his life will be held later.

Donations in his name to The Alzheimer’s Society would be greatly appreciated.